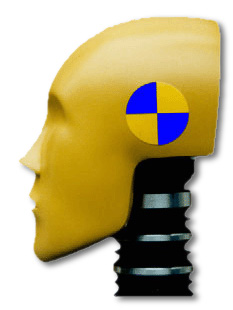 Daimler Chrysler in Chelsea, MI crashes two vehicles per shift and six per day in order to examine the vehicles and give them a safety rating. Guy Overall, a contact of ours stationed at the facility, is responsible for the HVAC systems in the plant’s crash area.

Last summer he contacted BAPI with an interest in our wireless sensors. Guy wanted to use our sensors in the crash area, but he didn’t want them for the HVAC system. He wanted to strap them onto the crash test dummies!

In order to ensure the accuracy of the testing, the crash test dummies’ external temperature must be measured prior to the crash. A BAPI Wireless Temperature Sensor is strapped to the body cavity of the dummies for a period of time preceding the crash as proof that they have reached an appropriate temperature. As far as we’re aware of, no dummy has crashed with a sensor still attached. One spare transmitter was purchased just in case.