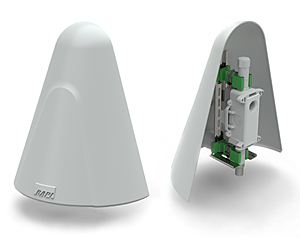 External temperature, humidity and air quality sensors can be affected by solar heat gain. This white paper will describe how the BAPI Weather Shade effectively reduces the solar heat gain.

Minimizing solar heat gain improves the accuracy of the sensor and improves the operation of the HVAC system because many BAS parameters are directly affected by the external temperature readings.

Temperature Readings With and Without A Weather Shade

To demonstrate how the Weather Shade reduces the effects of solar heat gain, outside air temperature sensors with and without a Weather Shade were mounted on the top of a retaining wall in Phoenix, Arizona. Those sensors are shown in Fig. 2 at right. The Weather Shade is mounted on a BAPI-Box 2 enclosure similar to the beige enclosure, and the readings from those two sensors are shown in the chart below. The two sensors with the blue enclosures are not used for this white paper.

The temperature readings from the two sensors are nearly identical except during the afternoon and early evening when the sun shine directly on the sensors. During the afternoon and early evening, the sensor with the Weather Shade reads about 6 to 10°F lower than the unshaded sensor, indicating that the Weather Shade effectively minimizes the effects of the solar heat gain.

Besides minimizing solar heat gain, the Weather Shade protects the probe filter from precipitation and grit, extending the life of the filter. The unit is also very rugged. BAPI used Computational Fluid Dynamics (CFD) to analyze the performance in high winds, and the Weather Shade survived the forces of a 120 mph wind with no failure.