Thermowells are hollow tubes closed off on one end and threaded at the other end.  They are permanently placed into pipes, tanks or sumps so that temperature measurement probes can be inserted into the pipe to measure the contents temperature.  The temperature of the contents is transferred through the wall of the thermowell.  The thermowell prevents the contents of the pipe from escaping and holds in the pressure of pressurized pipes. Thermowells are sold by insertion length, the length of the thermowell inside the pipe.  Fig 1 shows a 4” thermowell; notice that the 4” dimension is an approximate insertion length that is based on a schedule 80 8” diameter pipe (see Table 1 and Fig 2). 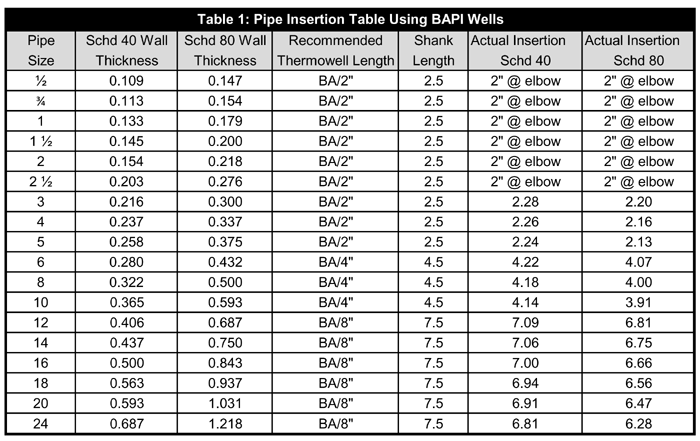 How Thermowells and Immersion fittings are installed.

Figure 2 shows a four-inch thermowell and four-inch immersion probe installed into an eight inch pipe.  In a properly insulated pipe with liquid or steam, the temperature is essentially the same across the entire cross section of the pipe.  Usually thermowells are sized to extend to the center of the pipe; however, shorter thermowells will give proper temperature readings if properly installed.  Shorter thermowells are used in pipes with high flow velocities, see Table 3.

Pipes Less Than Three Inches in Diameter
Figure 3 shows how a pipe tee can be used in an elbow application.  A 2-inch tee and a ½ inch to 2-inch bushing allows a 4-inch thermowell to measure the temperature of the contents of a 2-inch water pipe.  Temperatures in pipes as small as 1-1/4 inch may be measured by this method.  In small pipes the diameter of the thermowell may become a significant obstruction, be sure to check for proper flow rates.

Alternatively, Figure 4 shows how a 2–inch tee and a ½ inch to 2-inch bushing allows a 2-inch thermowell to measure the temperature of the contents of a 2-inch water pipe. Be sure to use a thread sealant on the outside threads of the thermowell.

Tables 2 and 3 were developed to insure that there will be no thermowell failures due to application stresses.  Thermowell failures, in most cases, are not due to the effects of pressure or temperature on the well.  The calculations necessary to provide adequate strength, under given conditions, are familiar enough to permit proper choice of wall thickness and material.  The values shown in Table 1 are conservative, and intended primarily as a guide.

Von Karman trails form as the fluid flows around the thermowell.  First the fluid swirls clockwise and then counterclockwise.  The swirls form low pressure regions behind the thermowell and the total fluid pressure pushes the well back and forth.

Thermowells are also safe if the resonant frequency is well below the wake frequency or if the fluid velocity is constantly fluctuating through the critical velocity point.  Nevertheless, if the installation is not hampered by the use of a sufficiently stiff thermowell, we recommend the values given in Table 2 not be exceeded.

Figure 5 is a picture taken by NASA’s Multi-angle Imaging SpectroRadiometer satellite on June 6, 2001.  A Von Karman trail extends over 300 km southward of Jan Mayen Island (North is to the left in Figure 5).  Jan Mayen is an isolated island of Norway, located about 650 km northeast of Iceland in the North-Atlantic Ocean. Jan Mayen’s Beerenberg volcano rises about 2.2 km above the ocean surface, providing a significant impediment to wind flow.

As each vortex is generated a low pressure region develops on alternate sides of the volcano.  The volcano is pushed slightly back and forth with each vortex.  Similar vortexes are generated by fluids flowing down a pipe with a thermowell in it.  The thermowell vibrates just like a tuning fork, at a critical frequency the thermowell will break off in the pipe.  If you use the recommendations in Tables 2 and 3, you should not have any problems for the life of your system.

If you have any questions, please call your BAPI representative.